When you book with an account, you will be able to track your payment status, track the confirmation and you can also rate the tour after you finished the tour.
Sign Up
4261

Transport: This route is an 8 day trip taking you from stunning Helsinki to the Baltics. You’ll spend 7 nights in your accommodation and you’ll travel by ferry or bus during the day.

Sustainability: This trip only creates 194.4 kg of carbon emissions! To fly the same route would cost 391.6 ♻️ 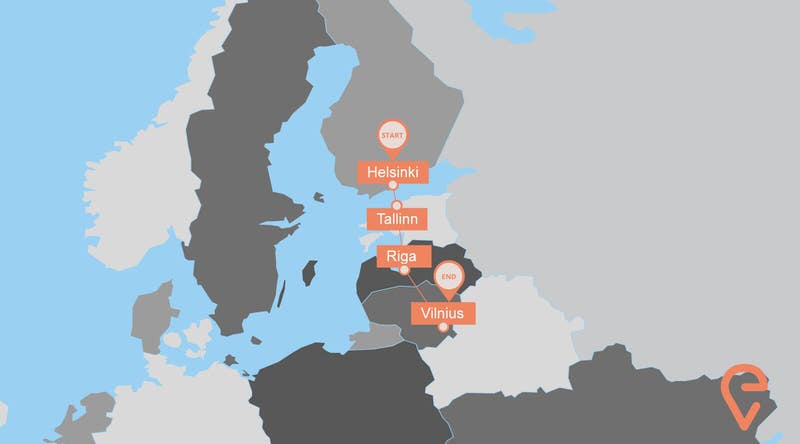 The Baltics are some of Europe’s most intriguing nations. The combination of Russian, Eastern European and Scandinavian influences makes them some of the best undiscovered gems in the region. Take our 1 week Baltics travel adventure to discover the best of Europe’s North East; this is the perfect route if you’re after something a little different, particularly if you’re on a budget, and the snowy climate makes it a perfect winter escape.

Start your Northern Europe holiday bright and early to enjoy the Finnish capital’s stylish boutiques and cafes. Helsinki is also the capital of Finnish Culture, with enough museums and galleries to keep you busy all day long.

Cross the sea and kick off the truly Baltic part of your trip. Tallinn’s old town has plenty of Scandinavian influence, as well as Slavic style – think a mixture of Stockholm and St Petersburg. It’s also full of trendy cafes and bars, with a blossoming foodie scene to check out that rivals any European hipster capital.

Next up are the beautiful cities of Riga and Vilnius – although they might often be known as stag-do destinations, there’s plenty of culture to be found in these Baltic gems as well!

Each city is home to a beautifully preserved old town, but beyond this each carries its own individual personality. Riga with its distinctive Soviet influence feels much more Eastern European, with plenty of architectural and cultural contrasts between old and new. Be sure not to miss Riga TV tower which is the tallest tower in the whole of the EU and the third tallest in Europe overall. Take a trip up to the machine room near the top (over 300m up!) and admire the incredible views of the city and beyond.

Vilnius will surprise you with it’s grand and ornate buildings – reflecting more of the old Russian influence that has played such a big part in this region’s history. Orthodox churches with colourful frescoes, beautiful market squares and pavement cafes make this small city the perfect place to chill out after a busy week exploring the Baltics.

Helsinki is understated elegance – sophisticated and arty. Here is where you’ll find Finland’s national gallery and museum, as well as an array of day trip options further afield. Take a boat out to Suomenlinna Sea Fortress or visit the world famous Rock Church, a space age cathedral carved right into the stone in Toolo, Helsinki.

Stroll through the magnificent Sibelius Park

Take a boozy sightseeing tour on the red pub-tram

A modern, stylish city with a medieval maze of passageways and cobbled streets, Tallinn is a great combination of both old and new. Recently the city has become a centre for contemporary art and design, with loads of independent boutiques and ateliers springing up – perfect to while away slow summer days.

Visit the museum of (both) occupations

Riga may be austere and gracious on the surface but dig deeper and you’ll discover awesome nightlife and a wealth of Baltic culture. Wind your way around the cobbled streets by day, come evening go underground to seek out some of the Baltic region’s best music venues.

Learn about the varied and fascinating history of Latvia in a walking tour of the old town.

Dance the night away, Latvian style, at Folksklub Ala Pagrabs

Marvel at the Art Nouveau style buildings – like the famous building, located at 2a, Alberta Iela

Vilnius is home to one of Europe’s largest Baroque old towns. The spires and coloured facades have a distinctly continental feel – not surprising since you’re only a few hours away from the North of Poland. Enjoy exploring the hub of Lithuania’s culture and arts scene – and don’t forget the hearty local cuisine once the sun sets.

Watch the sunset from the Hill of Three Crosses

The easiest way to reach Helsinki and Vilnius is to purchase a  flight – but if you’re looking to make your trip into a loop from the UK (and you have some time on your hands) then check out our 4 week Northern Loop package!