When you book with an account, you will be able to track your payment status, track the confirmation and you can also rate the tour after you finished the tour.
Sign Up
9119

Transport: The Pan European is our longest loop trip, covering 19 of Europe’s most incredible cities. This route is 57 days long, involving 55 nights in your accommodation and 1 spent on a night train. Journeys vary in length from a few hours to a full day or night’s travel. You can use your Interrail pass to start and finish at your nearest UK station for free!

Sustainability: This trip only creates 428.5 kg of carbon emissions! To fly the same route would cost 2610.8 ♻️ 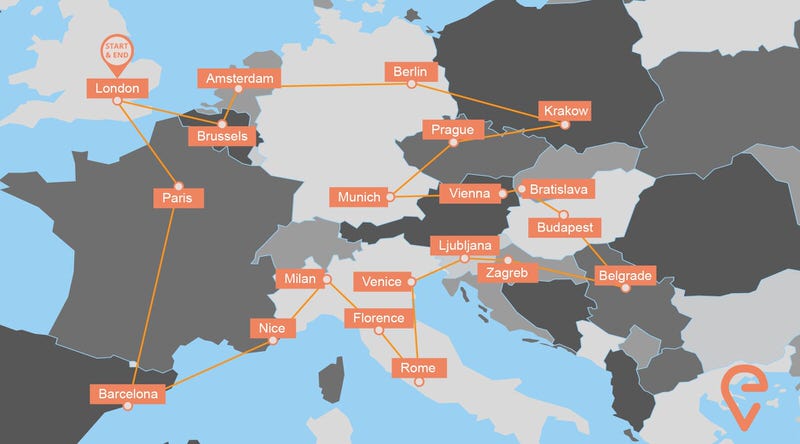 If you want a full-on interrailing experience and have a couple of months to cover all the highlights of Europe, the Pan European is for you. You’ll leave no stone unturned with this adventure around almost all of Central and Eastern Europe. This trip is deliberately slower paced so that you have between 2 and 4 nights in each city and can really make the most of each destination, rather than rushing and spending most of your time on trains!

Tick off all the major sights and big cities, and take in some hidden gems on day trips – you’ve got the time!

An epic 8 week adventure – not for the faint-hearted!

Take in 19 amazing cities in 14 countries over 57 days and stock up on amazing experiences from every corner of the continent. The Pan-European goes everywhere we think you should go in eight weeks, but if time is no barrier then you could go the extra mile and take on the mega Around Europe in 80 Days!

Think of the Pan-European as the lovechild of our most popular routes, the Whole Hog and the Eastern Trooper. You’ll dip in and out of other standard interrailing routes, starting out by following the Whole Hog with the addition of Krakow, Munich, Belgrade and Ljubljana, before you carry on through Italy, across France and nipping down to Spain before heading back up to Paris and London again.

Let us know if you want to start in a different city, or even if you have any other interrailing routes in mind that we haven’t thought of ourselves. We’ll happily add in some extra cities or customise the length of the trip. Sometimes we get really good custom requests that end up as new package, and the Pan-European was one of them!

There’s little more else to say other than if you want to see London, Brussels, Amsterdam, Berlin, Krakow, Prague, Munich, Vienna, Bratislava, Budapest, Belgrade, Zagreb, Ljubljana, Venice, Rome, Florence, Milan, Nice, Barcelona, and Paris, go on this trip – then you can let us know how to summarise it in 300 words!

London may be huge, but Central London can be walked all over, from the quirky pop-up stalls of the south bank to the glitz of the West End and out to Hyde Park. The buzzing cosmopolitan nature of the city probably makes it the most culturally diverse in the world.

If you’d like to spend a night in London before you head off then get in touch and we can customise this for you.

Alternatively, If you’re travelling on an Interrail pass for the trip, you can use this to get from your hometown to London for free, as long as it’s on the same day as your departure! This does not apply if you have individual tickets in PDF form.

Watch a show at one of many West End Theatres

Experience the quirky nightlife of Soho

Belgium’s biggest city accommodates an eclectic mix of old and new, from Europe’s most beautiful square, lined with guild houses and continental cafes, to its bureaucratic alter-ego as the capital of the European Union itself. Come for the delicious beer, waffles, and moules frites.

Love a good pint? Head to Delirium Cafe where they have more than 2000 types of beer!

Despite being credited with certain recreational pastimes, there is actually a lot more to the city than the stereotypical picture, with its abundance of engaging museums, beautiful townhouses, and canals. Find out what makes Amsterdam the beating heart of the Netherlands.

Take a tour of the Red Light District

Berlin is the alternative, cool kid of Europe and a pro at being edgy. It’s how people dress, their liberal attitudes, the graffiti, the skaters and BMXers, the art, the clubs and the food. Berlin is also crammed full with fascinating WWII history around every corner so there really is something for everyone.

Krakow escaped being reduced to rubble in WWII, preserving the postcard-perfect Old Town and the cellars housing its famous bars and clubs. That’s not to say it doesn’t share a chapter of history in the nearby Auschwitz concentration camp which demands a humble visit.

Prague is stunning, there’s no better word to describe it. On any side street or square you’ll find unique buildings full of colourful detail. The Czech Republic is also the home of Pilsner beer, with no lack of establishments to sample it in.

The capital of Bavaria and Germany’s second city will draw you in with its elegance and attractions to match those of the bigger names in Europe, with its pedestrianised city centre and impressive monuments, museums and art galleries. Let’s not forget the beer, and plenty of it at Oktoberfest!

Learn about the city at the Stadtmuseum

Walk across the sprawling Englisher Garten

Proudly guarding the Danube, the once twin cities of Buda and Pest show off every architectural style from Baroque to Art Nouveau. With its rickety trams and turn-of-the-century feel, you’ll be charmed by its past while you cure your hangover at any of the multitude of hot baths.

The capital of Serbia won’t disappoint you. Visitors from surrounding countries come here for the all-night party scene and friendly atmosphere. Tourists also come to see the world’s largest Orthodox church or just wander around the bohemian town centre from a bygone era.

Stroll through the beautiful Mirogoj cemetery

Ljubljana is a colourful chocolate-box city with a café culture that brings a festival atmosphere to it all summer long. See the castle perched above the city or take a day trip out by train to the picturesque Lake Bled, where you can hire a rowing boat and visit the island in the middle.

See the 16th century castle on the hill

Wander through the colourful streets

Take in 360-views from an art-deco skyscraper terrace

Trains or Bus to Venice – 7 hours

Venice is nothing short of unique, built on mudbanks in the lagoon, having foregone the convenience of cars for the charisma of canals. Getting lost in Venice is part of the fun, and if you’re on foot you’ll only find small backstreets or large piazzas, not a single road in sight.

Get lost in the alleyways and canals of the city

Ride a vaporetto down the grand canal

When in Rome, do as the Romans do. If that means indulging in gelato, pizzerias, cafes, and trattorias, then so be it. Rome will delight you with its eateries and mesmerise you with its monuments. Also visit the Vatican City, the world’s smallest country!

Marvel at the ruins of the Roman Forum

If you are touring the big cities of Europe and want to escape to the countryside, then the capital of Tuscany is one of the easiest places to do it from. Not that you’d want to, of course, once you’ve been seduced by the birthplace of Renaissance art and architecture… but we’ll leave that up to you!

Eat any number of fun flavours of exquisite ice-cream

Milan is cosmopolitan and fast-paced, a beacon of Western fashion with an addiction to culture as much as clothes. The world-acclaimed La Scala Opera House sits here, as does Leonardo da Vinci’s famous The Last Supper on the wall of Santa Maria Delle Grazie Basilica.

See a performance at the famous La Scala Opera

Looking out onto the French Riviera, Nice is a chic city with some of the best food in the country. Its appeal was future-proofed by 19th century British aristocrats who commissioned the popular Promenade des Anglais beachside walkway by which to stroll at sunset.

Explore the old-world town of Nice

See the sunset from the Promenade des Anglais

Take a sightseeing cruise of the Cote d’Azur

Barcelona is a city which offers everything in abundance. Delicious food, awesome nightlife, spectacular views from on high, and architectural and artistic marvels all around. As if that wasn’t enough, there’s plenty of green space (and beach) around… A trip to the Sagrada Familia cathedral, still in construction, is a must.

See the Picasso Museum in the Gothic Quarter

Crawl the bars around Las Ramblas

Paris is a byword for romance, a synonym for style, and the epitome of elegance. The pride of France and one of the most beautiful cities in the world, Paris needs little introduction, from the Eiffel Tower to the Pont Neuf, it bedazzles visitors and oozes charisma at every turn.

See the Mona Lisa at the Louvre Museum

Watch a cabaret act at the famous Moulin Rouge

Experience the colourful nightlife of the Marais

Finish your trip back in the UK’s enigmatic capital city and take a deep breath, you’ve made it!

Either finish your journey here (you can add on post-trip accommodation at check-out if you’d like), or continue your onward journey home (on the same day) to your nearest UK station for free using your Interrail pass!

With the Pan European, all your transport from the UK to the continent and back is included – no flights needed, yay!

Travel by train to and from your nearest UK station to London for free using your Interrail pass on the same day as arrival and departure!