When you book with an account, you will be able to track your payment status, track the confirmation and you can also rate the tour after you finished the tour.
Sign Up
2235

Transport:  This route is a 36 day trip and you’ll spend 34 nights in your accommodation and one on a night train. The rest of the time, you’ll travel by train or bus during the day.

Sustainability: This trip only creates 231.7 kg of carbon emissions! To fly the same route would cost 1015.4 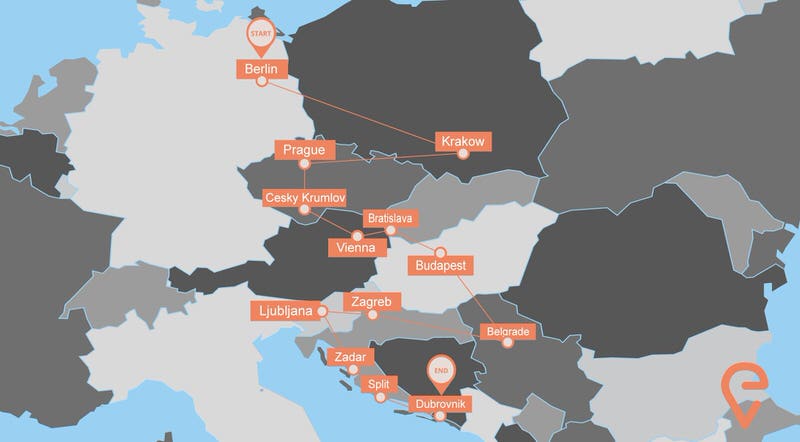 The Bohemian Adventure is a great value option if you want to see some of Bohemian Europe’s top cities on a budget – choose our 5 week option to see them at a leisurely pace. Each city has a great combination of nightlife, culture, and foodie treats to discover, plus you’ve got a week at the Croatian coast at the end of your trip for some well-deserved chill-out time.

Experience the lesser-visited side of Europe

On this route, you’ll get to take in the best of Bohemian Europe essentials. Exploring amazing countries that were off-limits until quite recently in Europe’s history, this fast-paced 5-week Bohemian Adventure interrailing trip covers a real mix of destinations from grand old cities to stunning Adriatic coastal towns.

Then you’ll head to Krakow, Poland. Packed with imposing and impressive architecture, homely eateries and luscious green parks – there’s plenty to fill your days with. With the city’s natural beauty, it’s hard to believe that it’s also bursting at the seams with amazing and vibrant nightlife. Whilst there, be sure take an unforgettable day trip to Auschwitz and Birkenau. We guarantee that it’ll be one of the most moving experiences you’ll ever have on your travels.

Next, head to magnificent Prague where you can soak up the fairy-tale atmosphere alongside plenty of cheap and locally-made beers. Continue along in the same vein in Cesky Krumlov, where you can explore the perfectly preserved old town. Then you’ll head to Vienna, the musical capital of Austria where coffee and cake reign supreme. A short hop across the border takes you to Bratislava to see its brilliant buildings and Disney-esque castles for yourself, before following the blue Danube as you make your way to the Hungarian capital of Budapest. Take a dip and relax in a thermal bath before sinking a glass of the local wine, Tokaji. You’ll appreciate some relaxation before carrying on the party at one of Budapest’s many amazing Ruin Bars. The final port of call along the Danube is Belgrade, the capital of Serbia and one of Eastern Europe’s most interesting and underrated destinations.

Next up, you’ll head to Croatia, calling first at the vibrant capital of Zagreb, before popping into Slovenia for a few days in Ljubljana. This cute and colourful city has plenty of history of its own and is the perfect base for a day trip to the jaw-dropping Lake Bled – not to be missed!

Now you’ll head back into Croatia but this time you’ll head south to Zadar. Listen to the Sea Organ (yes, really!) and watch sunsets that some claim are the world’s most beautiful, before continuing to the stunning city of Split perched on the shores of the Adriatic. Visit Krka National park, take a ferry across to Hvar or Brac islands, or just wander around the beautifully preserved Roman old town. Finally, wind your way down to the UNESCO World Heritage Site of Dubrovnik (home of Game of Thrones), where you can chill with a cocktail and watch the sun set on the trip of a lifetime!

Prefer to fly back from Split rather than Dubrovnik? No problem – you can add the return bus journey to Split at check-out, just make sure you’ve allowed yourself enough time to get there and check in (the bus is around 5 hours).

Berlin is the alternative, cool kid of Europe and a pro at being edgy. It’s how people dress, their liberal attitudes, the graffiti, the skaters and BMXers, the art, the clubs, and the food. Berlin is also crammed full of fascinating WWII history around every corner so there’s something for everyone.

Cesky Krumlov is often sighted as the “undiscovered” Prague. We’re not sure how undiscovered it really is, but it certainly makes a great value addition to your stay in the Czech capital. Enjoy the pretty pastel buildings, slow pace of life, and quieter (but just as quaint) Old Town.

Visit the Eggenburg Brewery to see how their tasty Pils is made.

Proudly guarding the Danube, the once twin cities of Buda and Pest show off every architectural style from Baroque to Art Nouveau. With its rickety trams and turn-of-the-century feel you’ll be charmed by its past while you cure your hangover in any of the multitude of hot baths.

The capital of Serbia won’t disappoint you. Visitors from surrounding countries come here for the all-night party scene and friendly atmosphere. Tourists also come to see the world’s largest Orthodox church or just wander around the bohemian town centre, with its arty cafes and hipster foodie hangouts.

Ljubljana is a colourful chocolate-box city with a café culture that brings to it a festival atmosphere all summer long. See the castle perched above the city or take a day trip out by train to the picturesque Lake Bled, where you can hire a rowing boat and visit the island in the middle. We’ve given you extra time here, so you can chill out and enjoy the beautiful landscapes.

See the 16th century castle on the hill

Wander through the colourful streets

Take in 360-views from an art-deco skyscraper terrace

Like many of its Adriatic cousins, Zadar has plenty of amazing beaches and blue skies. From here explore amazing Croatian Islands such as Pag, or take a trip to Plitvice Lakes.

Listen to the magical Sea Organ cut into Zadar’s beaches

Embark on an epic pub crawl with new friends

Take a trip to Pag Island, just north of the city